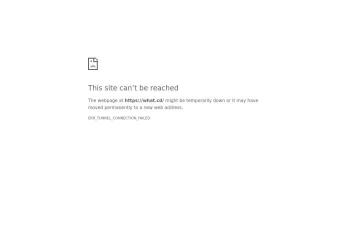 Founded 2007, What.CD sprang up from the ashes of famed tracker OiNK’s Pink Palace and has grown to a well-respected music torrent tracker. The community around What.CD has build an impressive selection of music, comic books, software, audiobooks and e-books. Fast download speeds, well-seeded torrents and a wide selection of music files encoded in a variety of formats makes What.CD a paradise for music lovers.

In December 2010, What.CD’s torrents collection hit the 1 million mark, a record for a private BitTorrent tracker at these days.

What.CD is an invite only tracker looking for members who are active in the community, interested in music and willing to share with others by seeding and uploading music. To pass the interview, you need to know general BitTorrent vocabulary (ratio, seeding), basics in ripping and transcoding music, audio formats and at least knowing What.CD’s site rules. Trading, selling and buying invites is strictly prohibited.

An alternate way to get an What.CD invite is to join a different torrent tracker and build a good reputation there and see whether there are WCD invite or recruitment threads.

Despite being a private community of music fanatics, What.CD has developed one of the most modern torrent tracker backends. Named Gazelle, the lightweight open source framework not only powers What.CD but also a handful of other private torrent trackers. Although naturally focusing on music, it can be modified for most needs. A new Javascript-based framework called meteor-gazelle is currently in development.

Soon after What.cd’s shut down the site released a detailed farewell message on Twitter:

What.CD has completed its shutdown. We are confident that our staff and users are safe. It is with enormous sorrow in our hearts that we must now move on with our lives.

Please join us in a final round of thanks to all the staff and users, past and present, who worked tirelessly to make What.CD one of the most extraordinary places in the history of the internet. To the administrators, developers, moderators, team members, interviewers, uploaders, downloaders, seeders, musicians, designers, archivists, and historians who contributed countless thousands of hours of voluntary effort: our library could not have existed had you not been willing to build it piece by piece. To the donors who kept that library alive in exchange for little more than the promise of eternal love: you gave us the very ground we built upon. And to everyone who participated in our vibrant community: you made our extraordinary place an extraordinary home.

To OiNK: thanks for paving the way. One remaining hope for What.CD’s legacy is that it, too, will serve as a model for whatever comes next. Learn from our successes and learn from our failings. We’ve always avoided politics; our position should be clear. So if our memory is to achieve anything, let it serve as a kind of proof. You were there. You shared an experience with hundreds of thousands of kindred explorers. Don’t forget that there are people who are willing to work to ensure that works of cultural value can be preserved and shared. Granted, we worked within the limitations of our time, place, and model, but the goal supersedes the details.
Saying goodbye isn’t easy. We cannot quantify what you mean to us. Scarcely has there been a truer labor of love. To each and every one of you, we say thank you for making What.CD what it was.

We can offer no guarantee of further communication at this time. What happens next is in your hands. That said, we aren’t worried. You’ve given us a profound cause for hope. Serving you throughout the years has left us certain of two simple truths. The first is that our species is rich in talent, endurance, and passion – more so than we give ourselves credit for. The second is that music makes the world go ’round.

We’ve seen what happens when thousands of people work together to build a tribute to human culture free from concern over profit or acclaim. The results are beautiful. And now it’s time to move along with that in mind.

Supporters should consider donating to the organizations below:

Usage of VPN/proxy not allowed

What CD does not allow browsing the site using a proxy or Tor service. This includes VPN's with dynamic IP addresses. The site will automatically notify all visitors who nevertheless do so. When accessing the site with a VPN it warns: Error – Your IP address has been banned.

What.cd servers were confiscated in a raid, the music tracker closed it doors.

What CD hits the one million unique music releases.

What.cd raid and shut down

Arstechnica about the world's largest torrent tracker shut down

Torrentfreak article regarding What's shut down

What.CD interview preparation guide for potential users to learn about music formats, transcodes, torrenting and ripping. The site was written as a comprehensive knowledge base providing technical information and community rules in order to pass the What.CD interview. The interview guides are available in English, German, Italian, Dutch, Russian, French and Spanish.

Guide about building ratio on What.cd or Waffles without a seedbox.

Historical details about What.CD and leaks published on WCD.

Do you know a What.CD profile? Please leave it in the comments.