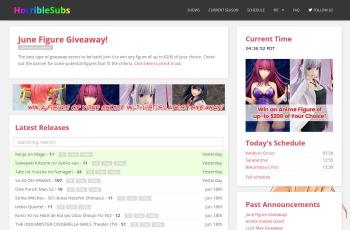 HorribleSubs, one of the most popular anime sites, has thrown in the Towel. A statement on the official site horriblesubs.info reads:

HorribleSubs began more than a decade ago providing subtitles for anime. We have grown way beyond what was originally imagined. But… as the cliché saying goes, all good things must eventually come to an end.

This was a hard decision to make for the team, but the truth is, our real life responsibilities have been growing, especially in the times of COVID-19. COVID-19 has really impacted us in various ways, but ultimately it negatively affected how much time we were able to frequently contribute. After some reflection and evaluation, we realized moving on was the best way forward. You could technically say COVID killed HorribleSubs.

This is naturally a good transition point since the Summer 2020 anime season ended and the Fall 2020 anime season is just about to begin. Yes, we waited to finish most of the series before dropping this news. Be grateful for that. However, do not worry. We’re certain that other groups will pick up the mantle.

Thank you all for joining us on this journey. Many good memories were made, but it is time to say goodbye! Feel free to share whatever thoughts you have in the Disqus thread below. 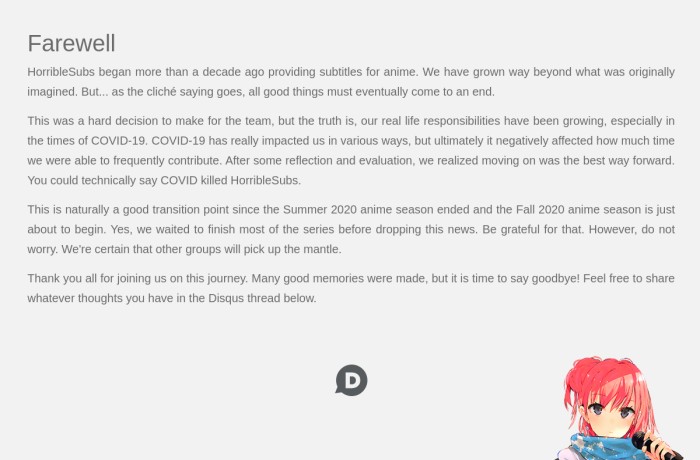 Anime galaxy with a vast community

HorribleSubs (HS) is a fansub group with a huge collection of anime series available for download in 480p, 720p and 1080p. They translate, time, encode, and edit their own anime shows. The site also offers XDCC, a way to download files through IRC. If torrents are slow for someone, XDCC might be a lot faster.

so bad yet so good

Rips from Crunchyroll, Funi, and other English language licensors and rereleases on torrent sites. Using robots. As the dirty work of translation is out of their hands, no one can compete with the speed and breadth of their releases.

On the other hand, they are wholly dependent on the work of CR and Funi, and make little to no modifications. This means that they cannot grab unaired OVAs or any Blu-ray exclusive content, only broadcast anime available on streams.

Not to mention that they are way, way out of the legal grey area of fansubbers, and they give middle fingers to the licensors they undermine. Most of all, after effectively spitroasting speedsubbers and licensors, they now troll their own viewerbase for the lulz.

It’s certainly a fascinating group, and their exchanges are comedy gold. In the end, the best thing to say about HorribleSubs is:

it hurts so good

Access HorribleSubs with these proxies when horriblesubs.info is blocked by your ISP, company, or university. Find more torrent proxies sorted by speed on HorribleSubs's proxy list.

HorribleSubs has been blocked by ISPs across the globe. Torrent proxies and mirrors are hosted in countries where HorribleSubs is not blocked (yet).

Legit and save HorribleSubs sites

There are HorribleSubs proxy sites, alternative URLs and mirror sites. Some of them are legit and trustworthy while others may harm a visitors computer or try to make profit by misleading users to malicious adverts.

How do you know which HorribleSubs site you can use safely?

Do you know a HorribleSubs profile? Please leave it in the comments.