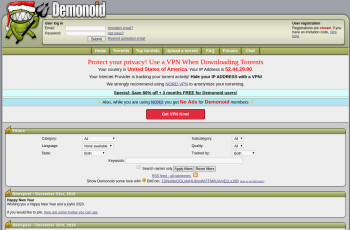 Demonoid.is has become the community powered version of Demonoid. With the help from Demonoid’s staff a “new Demonoid” was set up that looks and feels like the old site. Initially launched on the domain dnoid.to it is now accessible from demonoid.is.

Demonoid gets rebuild, new site Demonoid.info (Update 5)
In an announcement made on Demonoid’s reddits, former staff provides some information of what is going on currently with the tracker. A new Demonoid site is currently developed by former staff and community members. The official domain for that Demonoid site is demonoid.info. There is no backup from the old Demonoid tracker so users have to re-register again. The new torrent sites does not host any torrents at the moment.

Shutdown (Update 4)
Several P2P news and social media comments reported that Demonoid’s founder and Admin Deimos had died in an accident in the summer of 2018.

Demonoid.pw domain no longer official URL (Update 3)
There is no official Demonoid site at the moment. The site is down and all so called Demonoid alternatives and mirrors are fakes.

Demonoid.pw proxies down (Update 2)
Together with the official domain demonoid.pw, the official proxy dnoid.me is no longer online. Other proxy sites either reflect an older version of the torrent site or are fake pages.

Demonoid down (Update)
Demonoid’s website demonoid.pw is offline. The site displays an Error 502 served by CDN operator Cloudflare. According to Torrentfreak, Demonoid has had technical problems for several weeks. Users said they could visit Demonoid’s homepage but could not open a torrent page.

The torrent tracker, which has gone through many offline periods in its history, has not been accessible for several days. 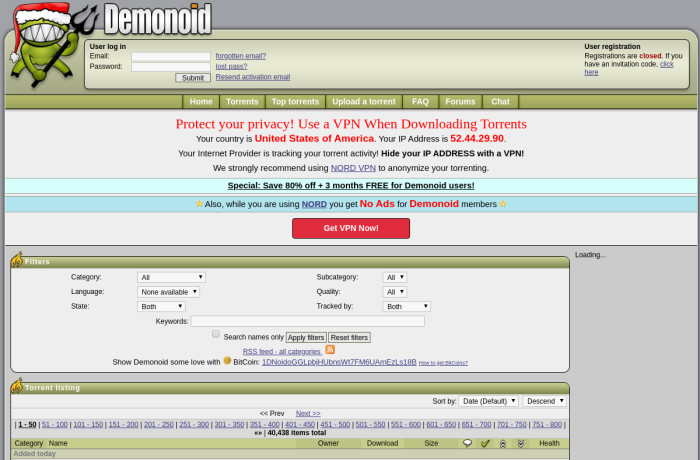 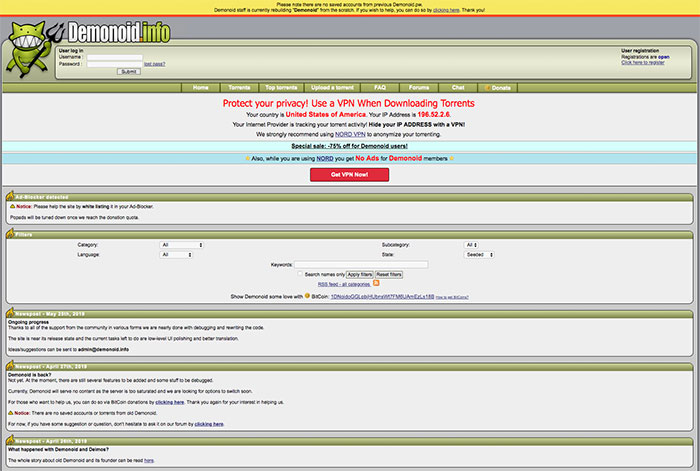 Demonoid is a semi-private torrent tracker and one of the oldest torrent communities. Demonoid has run into quite a few issues over the years and turned off the lights for weeks or even months. In 2014 the torrent site returned under the new domain demonoid.pw. Since May 2015 the site requires adblockers to be disabled to access the site. In February 2017 Demonoid went offline when the team behind the site ran into hosting issues and internal problems. It came back online in March 2017. When ExtraTorrent shut down in May 2017 many torrenting users moved forward to alternatives like Demonoid as a new torrent resource.

Demonoid Downtimes
In the spring of 2017, Demonoid went down due to hosting issues and stayed offline.
Since March 2017 the site is online and runs most of the time.
In September 2018, Demonoid became unusable for many users due to technical issues. So far, there was no sign of a return of Demonoid in early 2019.

Community Rebuild Site – Demonoid 2
In May 2019 former staff of Demonoid announced the rebuilding of the defunct tracker. Demonoid Fora was set up as Demonoid’s gathering place run by Demonoid staff. The statement says that the new site is in a public beta testing phase. 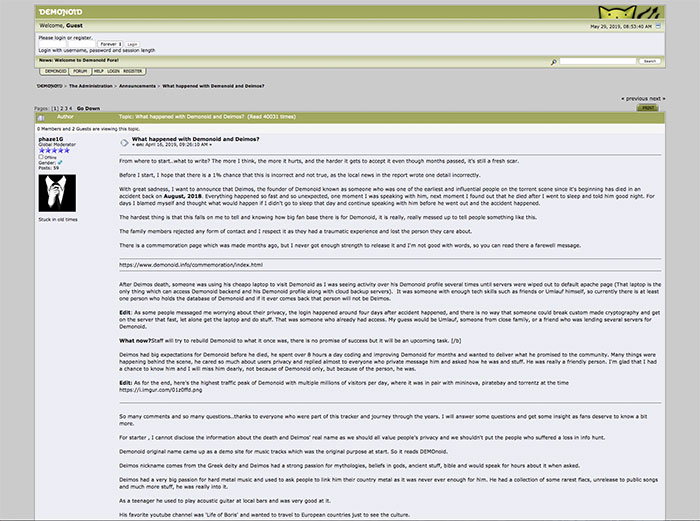 Demonoid.info fora info about what happened with Demonoid and Deimos

Access Demonoid with these proxies when demonoid.is is blocked by your ISP, company, or university. Find more torrent proxies sorted by speed on Demonoid's proxy list.

Demonoid has been blocked by ISPs across the globe. Torrent proxies and mirrors are hosted in countries where Demonoid is not blocked (yet).

Demonoid behind a Tor proxy

To connect to Demonoid using Tor you can use this onion adress: http://demonhkzoijsvvui.onion (open via Tor2web)

Legit and save Demonoid sites

There are Demonoid proxy sites, alternative URLs and mirror sites. Some of them are legit and trustworthy while others may harm a visitors computer or try to make profit by misleading users to malicious adverts.

How do you know which Demonoid site you can use safely?

Do you know a Demonoid profile? Please leave it in the comments.