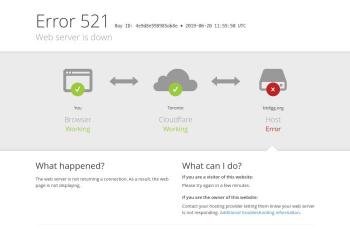 BTDigg search is down (Update 3)

While the homepage of BTDigg’s successor btdig.com is working again, the original DHT search is still defunct. It currently prompts an error 521.

Original BTDigg.org is down (Update)

The original BTDigg.org has partly redirected to a malicious advertising site and now prompts an error 352, meaning the server is down. The official btdigg.org has been online 2016 for the last time and stays silent since then. The DHT torrent search BTDigg is no longer available.

BTDigg successors like btdig.com appeared after the original site shut down. So did several BTDig proxy sites helping to unblock it.

BTDigg is a BitTorrent DHT search engine. Instead of relying on .torrent files BTDigg uses BitTorrent’s DHT to discover new files. All results return as a magnet link. The project name is an acronym of BitTorrent Digger.

According to TF, BTdigg has discontinued its service as more and more torrent spam flooded the index. At this time the site’s operator considered a comeback of BTDigg in case he finds a solution to deal with the spam issue. After BTDigg went down in 2016, btdigg.org did not came back online.

The DHT crawler empowering BTDigg’s torrent search was open sourced. With the code being available several alternative BTDigg variants appeared. One of the most popular successors is btdig.com.

Access BTDigg with these proxies when btdigg.org is blocked by your ISP, company, or university. Find more torrent proxies sorted by speed on BTDigg's proxy list.

BTDigg has been blocked by ISPs across the globe. Torrent proxies and mirrors are hosted in countries where BTDigg is not blocked (yet).

BTDigg behind a Tor proxy

To connect to BTDigg using Tor you can use this onion adress: btdigg63cdjmmmqj (open via Tor2web)

Legit and save BTDigg sites

There are BTDigg proxy sites, alternative URLs and mirror sites. Some of them are legit and trustworthy while others may harm a visitors computer or try to make profit by misleading users to malicious adverts.

How do you know which BTDigg site you can use safely?

Do you know a BTDigg profile? Please leave it in the comments.